With the no make-up make-up trend taking the front seat, this look was kept minimal with a muted nude lip crayon gloss, which perfectly complemented the attire. But we played with her eyes adding white two her crease giving it minimal yet shimmery feel to her eyes. Fluttery lashes was the pick to add glamour to the look. Keeping in tone with her outfit,’ her hair was left open to flaunt her soft straight tresses. And the highlighter of this look is yes of course flowers and pearl pinned to her tresses. The falling floral hairstyle is catching on since Anushka Sharma wore it on her big day. So instead of picking up accessories for your coming wedding look,  think of flower crown either but with a twist. Her cheeks have been brushed pearl rose way.

A splatter marigold bringing sun into the night ..  Focus more on apple blush on with peach highlighting with complete nude look lips, giving it a sober bride look. Soft coral and peach blended close to the last line keeping the rest eyes bare. Perfect after loud make up for the next day Reception look. Or sober brides can carry this soft look too on the wedding day.

April 22, 2018April 22, 2018 Ritu Kolentine
Ritu Kolentine is an international makeup, hairstyle artist and cosmetologist of international repute. She is a recipient of multiple awards for her prowess in makeovers. A well-known established name in the northern region, Ritu Kolentine, owner at Ritu Kolentine Makeover Studio and Academy, was recently awarded by several organisations of Jalandhar on the occasion of International Women’s Day.
Ritu was awarded with ‘Women Pride’ award by Swaragini Achiever’s Award organised by Bhawna Creations. She was also honoured by District Akhil Bhartiya Human Rights Association with the title of Women’s Pride. She was also honoured by Helping Souls NGO and Humanity NGO.
Kolentine thanked all the associations and NGOs for honouring her with such prestigious titles.

During her recent visit to the international Global beauty conference held in New York, Ritu Kolentine received the international award for ‘Excellence in Superior Customer Loyalty” by Repechage. The award was given by skin and seaweed queen Lydia Sarfati, CEO and Founder, Repechage and Chairman of CIDESCO Section USA.

The awards was hosted by contemporary Bollywood actress and proprietor of The Primetime Theatre Company, Lillette Dubey along with other important dignitaries including Gaurav Marya, Chairman, Franchise India Holdings Limited.

Ritu Kolentine has been awarded with the ‘Women Entrepreneur of the Year 2017’ award by the North India Franchise on January 14 at the North India Franchise Awards 2017 held at Hotel The Lalit, Chandigarh. Ritu Kolentine, was awarded with ‘Women entrepreneur of the year’ title by Ms Asha Jiaswal, Mayor of Chandigarh along with other
important dignitaries including Ms. Ashna G Sharan, Director and CEO; Franchise
India Holdings Limited and Mr. Charanjeet Singh, chairman; Chandigarh Beopar
Mandal. 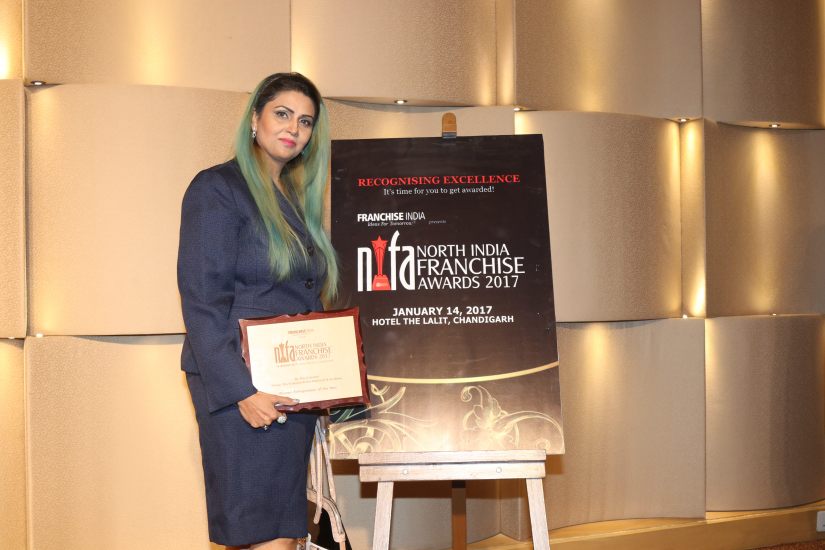